Is Your Printer Tracking You?

Q: Is it true that color laser printers print invisible dots to ID the printer on every page?

This question was answered on June 7, 2017. Much of the information contained herein may have changed since posting. 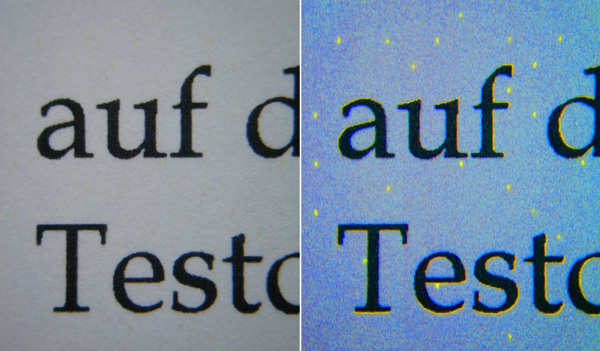 The leaked top secret document that led to the arrest of government contractor Reality Winner has caused a long running privacy issue to resurface.

The hidden yellow dot ID pattern technology on some color laser printers has actually been around since Xerox developed it in the 90’s.

The primary reason for the dots is purportedly to help the Secret Service in counterfeiting cases.  Color copiers and laser printers became so good at reproducing colors that they become a tool for counterfeiters some time ago.

Not all color copiers and laser printers print the dots, but for obvious reasons, the printer manufacturers and law enforcement don’t generally acknowledge which printers do and which ones don’t.

Privacy Concerns
Privacy advocates such as The Electronic Frontier Foundation have been calling attention to this for almost a decade (https://goo.gl/4g8XGk). Their position is that your printer shouldn’t be another tool for government surveillance.

In the Reality Winner case, it’s believed to be what led to her arrest because the dots were easily viewed on the document published online by the Intercept (https://goo.gl/b3KlN9).

What Gets Tracked?
The yellow dots when decoded can indicate the make, model and serial number of the printer and in some cases, include the date and time.

With this information, law enforcement can potentially track down the owner of the printer by following the serial number from the manufacturer to the reseller and then to the purchaser.

Making The Dots Visible
By design, it’s nearly impossible to see the dots with the naked eye, so you’ll want a way to magnify any page that you want to inspect.

Using a microscope or magnifying glass with magnification power of 10x or better to view a blank part of a printed document should allow you to see the dots if they exist.

If you want to make it easier, use a bright blue LED flashlight in a dark room, which should turn the yellow dots a dark blue or black.

If you have a good quality scanner and a graphics program that can zoom and invert the colors, you can also find the pattern, which should repeat itself throughout the page.

List of Known Printers
The EFF has published a list of printers that they say do and do not display the tracking dots (https://goo.gl/UV3q9K), but it’s not up-to-date nor is it a complete list.

In some cases, the printer manufacturer will acknowledge the use of the tracking information in their documentation, but it’s not easy to find even if they do.

What Can You Do?
Technically speaking, setting your color laser to print in black and white won’t allow the yellow dots to be printed.

If you have to use color and are concerned about the tracking dots on a known printer, there is nothing you can do to stop them short of getting rid of the printer.

If you are overly concerned, switching to either a color inkjet or any type of black only printer will ensure that the tracking dots won’t be included.